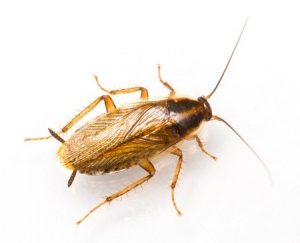 There are plenty of pests you would hate to find inside your property, but cockroaches are probably near the top of your list. Many homeowners deal with at least one type of cockroach at some point, and one of the most common species is the German roach. These insects are capable of living in just about any type of environment, and they are commonly found throughout most parts of the world. We’re here to go over some of the most common signs that may indicate you have a German cockroach infestation.

A telltale sign that German cockroaches are in your home is the droppings they leave behind. While they may be hard to spot at first if you aren’t looking, they will soon become apparent if you have a large enough infestation. Their droppings look like small, dark balls that may appear to be pieces of pepper at first glance. You will find these on floors, countertops, and any other areas of the home that cockroaches have frequented.

In addition to their droppings, German cockroaches give off an odor that you will most likely pick up at least a few times. They give off an odor that some people describe as musty, but it is usually fairly mild. If you have many cockroaches in your home within the same vicinity of each other, you will probably be able to smell them to some degree.

The last major sign of a German cockroach infestation is the egg capsules they leave behind. It only takes a day or so for a female cockroach to carry eggs before they hatch, so it won’t be long before you may start noticing broken egg cases around the home.

If you notice any of these signs of a German cockroach infestation don’t hesitate to contact a professional to take care of the problem immediately!