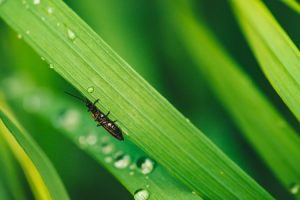 Western New York typically sees plenty of snow in winter months, and as a result, very few bugs. However, temperatures are warming up and seasons are changing. While April showers are certainly a sign of spring, they are also a sign that bugs will soon surface.

Why does it seem that significant rain fall typically results in an abundance of insects?

Rain Forces Bugs Out of Soil

Many bugs typically live under ground or within soil such as ants, beetles, and so forth. When significant rain falls, their underground homes are flooded. Rainwater can seep into cracks which results in the soil becoming soaked. The bugs are forced to climb out from the soil in order to escape the water and prevent themselves from drowning inside of the soil. (This is why in Western New York, we often see worms all over the ground after a rain shower)

Most insects search for shelter during a rainstorm. Sometimes that is underneath a leaf, in the corner of a garage, underneath a shingle, or inside of your home. Most insects don’t want to get soaked in a rainstorm, and just as we do, they seek shelter from rain showers. However, there are several bugs, such as mosquitos, that love humid conditions so they welcome the rain.

Some bugs, such as bees, are smart enough to sense when a storm is coming so they will stay stationary as a result. Rain can actually be a danger to some insects which is why so many of them avoid rain. For some insects, heavy rain can weigh down their wings making it difficult to fly. For other insects, rain can actually damage their wings making it impossible to fly. Many insects avoid rain for safety purposes.

If you have insect or pest problems this spring, contact Amherst Exterminator to take care of them for you.