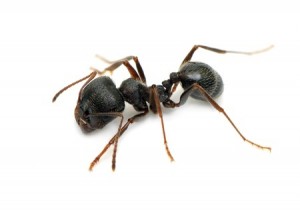 In Western New York and beyond, the springtime brings out Carpenter Ants and other insects that are as excited about the newfound Sun as we are. The Carpenter Ant varies in size and color, but they are usually large (1/4-1/2 inch) and blackish in color.

Occasionally, swarms of winged Carpenter Ants called reproductive Carpenter Ants emerge inside a home. If, in the early Spring, the weather is not suitable for a Carpenter Ant to survive outside, then you could have a Carpenter Ant nesting issue in the structure. During nesting, Carpenter Ants damage wood by hollowing it out. They excavate galleries in wood which have a smooth, sandpapered appearance. Wood which has been damaged by Carpenter Ants contains no mud-like material, as is the case with termites. Shredded fragments of wood, similar in appearance to coarse sawdust, is ejected from the galleries through preexisting cracks or slits made by the ants.

While Carpenter Ants nest in both moist and dry wood, they prefer it to be moist. Consequently, the nests are more likely to be found in wood dampened by water leaks, such as areas around sinks, bathtubs, poorly sealed windows or doorframes, roof leaks, and poorly flashed chimneys. Nests are especially common in moist, hollow spaces such as the wall void behind a dishwasher, or in a hollow porch column.

It is important to realize that nests can be located either inside or outside the structure. Carpenter Ants actually construct two different kinds of nests: parent colonies which, when mature, contain an egg-laying queen, brood and 2000 or more worker ants, and satellite colonies which may have large numbers of worker ants but no queen, eggs or young larvae. The Carpenter Ants inside a home may have originated from the parent colony or from one or more satellite nests. For example, ants may come from a parent nest located outdoors in a tree stump, landscape timber or woodpile, or from one or more satellite nests hidden behind a wall in the kitchen or bathroom, or in wood dampened by a roof leak in the attic.

The extent and potential damage to a home depends on how many nests are actually present within the structure, and how long the infestation has been active. Although large Carpenter Ant colonies are capable of causing structural damage, the damage is not normally as serious as that from termites. In some cases, the damage may be relatively insignificant, but this can only be determined by locating and exposing the nest area.

Control of Carpenter Ants is best achieved if the nest is destroyed. If the nest can be found, it is normally directly injected and destroyed. The technician who addresses this issue with you will review all areas where a moisture issue is a possibility. Barrier applications, with a baiting process or residual chemical application, are the norm for this type of problem.

Seasonal Programs that provide regular maintenance are very helpful in resolving these problems, along with pinpointing the source. If you’re having issues with Carpenter Ants, call Amherst Exterminators today at 908-2475 to set up an initial consultation.