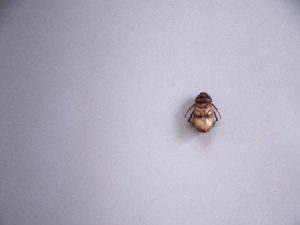 As humans, we eventually turn off the lights, brush our teeth, pull the sheets back, and climb into bed.

For many of us, sleeping is something we really look forward to at the end of a long day.

However, many animals sleep and the majority of bugs are no different.

Bugs, such as cockroaches, fruit flies, and praying mantises, also go to bed at the end of a long night.

Even fruit flies, who are minuscule creatures, make sleep a focus of their daily schedule. Barrett Klein, a biologist at the University of Wisconsin-La Crosse said “Fruit fly sleep is similar to mammal sleep since the flies respond to sleep-inducing chemicals and caffeine, just like people.” In fact, fruit flies can actually become sleep deprived just as humans can.

However, it can be hard for scientists to understand and document the sleeping habits of bugs.

Many bugs often drift into a “sleep-like state” which can make it difficult to know when they are sleeping versus when they appear to be sleeping because they are just being still.

If you want to know if a bug is sleeping, you should look to see if the bug seems to be drooping down, (due to gravity) and has relatively relaxed muscle form.

If a bug is asleep, it can also be difficult to wake them up, which is another similar sleeping habit that we share with them.

Katy Prudic, a biologist at Oregon State University, explained that science still does not know if butterflies sleep or if they simply “rest.” Butterflies do occasionally experience “torpor” which is when they can’t move due to cold temperatures, which can also give off the appearance of sleeping butterfly.

After researching the sleeping habits of honeybees, scientists also discovered that bees that are “sleepy” are not helpful in the hive and struggle to communicate, similar to how a human would act if they were tired.

Whether the bugs in your home are wide awake or seem to be in a deep sleep, you don’t want them getting comfortable. Contact Amherst Exterminators to take care of any issues.